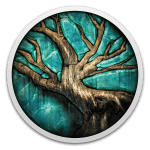 A party-based RPG based on the Advanced Dungeons & Dragons 2nd edition ruleset, and set in the frozen plains of Icewind Dale.

A Mac version of Icewind Dale has been available from Gog.com for some time now, and it turns out that there are some great mods out there to make it even better, some of which even have Mac versions available for download. Unfortunately, many of them will not work out of the box on Mavericks. Fortunately, they can be made to work, if you’re not afraid to jump in to the Terminal and type some commands.

Mac version of mods are available from The Gibberlings Community, and though there are mods available for games like Baldur’s Gate, I’m going to focus on some of the recommended ones for Icewind Dale for this guide (you may well be able to use a similar process for modding other Infinity Engine games, like Planescape: Torment).

You’ll need to extract WeiDU, as well as any mods you downloaded. The Unarchiver should work well for this purpose.

From there, double-click the drive_c shortcut, then open GOG Games and then Icewind Dale Complete. You’ll need to keep this window open until you’re done.

Lastly we need to set up the Mac version of WeiDU, as it won’t quite work out of the box. To do so, go to the extracted WeiDU-Mac folder, then open bin and then x86-64. You need to rename the correct version of WeiDU for your operating system. So for OS 10.9(+), find the file called weidu+mavericks and rename it to WeiDU (note that it’s case-sensitive).

then drag the x86-64 folder from the WeiDU download onto the Terminal window (the whole thing should now read something like export PATH=$PATH:/Volumes/Macintosh\ HD/Users/me/Downloads/WeiDu-Mac/bin/x86-64) and press return. You’ll want to use this Terminal window for the next steps, so keep it open.

Which mods you want to install is largely a personal preference, as some will add new content, while others will fix bugs, modify the rules, or update the graphics. Not only is the choice of mods important, but the order you install them is too.

Make sure you grab the OS X version of the mod in each case.

As noted earlier, mods should be installed in a specific order. With that caveat out of the way, here’s how to do it (I’ll be using the Improved BAMs mod for this example, but all of them follow a similar process).

This process can be repeated for any other mods you want to install, and then you can close all the windows and run the game normally.