Much has been written about how smooth text looks on a retina display. I’d actually argue that’s one of the most insignificant points. What was really striking to me after first powering it on were the drop shadows. Good grief, those looked incredibly real. There’s a moment in the installer, when “welcome” travels across the screen in various languages (with a cheap parallax effect to give the illusion of depth)– something I’ve seen dozens of times before. Only this time, I could have sworn I was looking at something in 3D, with real depth. Even the mouse cursor makes it look like you’re controlling and actual piece of plastic behind the glass.

The thing is this: in principle, there shouldn’t be any difference between looking at a retina display, and looking at an HD monitor from 2 meters away. But there is. An important reason, that many technology journalists seem to be missing (but anyone with a film background won’t): when you use the MacBook Pro, the display almost fills your vision. You can get really, really close to this thing before you start to see pixels. Even using it “normally” (which to me means “hunched over the keyboard”), I’d say that the screen occupies 3/4 to 4/5 of my vision (peripheral vision notwithstanding). Granted, it’s not perfect, but outside of a cinema, I’d struggle to find something so immersive (perhaps the new iPad, if I had the inclination to hold it less than a foot from my face).

That’s all well, and good, but how does it game?

As promised, I ran some games at the native 2880×1800 resolution. These were conducted with OS 10.8 (because the 10.8 Nvidia drivers are much improved over the 10.7 ones). The first thing I discovered was that my theory about not needing antialiasing was proved completely wrong. If you don’t have any antialiasing, you’ll see a lot of flicker on the edges of items. Next is that you absolutely have to have vertical sync. If you don’t, you’ll see tearing all over the place, in multiple directions, and it will probably give you motion sickness.

Another issue I discovered is that some games will crash immediately on launch with the new Macbook Pro. The reason for this is that they try to initialise in an unsupported resolution. For example, Dragon Age: Origins launches, but the video doesn’t show up, as the resolution is set to 1024×640 by default, and needs to be manually changed (as an aside, we’ll update all of our Games entries with compatibility notes for Retina-capable MacBooks). The last downside is that the UI elements in a game don’t necessarily scale very well, and are thus too small to be practical.

That aside, when it works well, it’s an incredible experience. Dragon Age II for example, runs extremely well, as the frame rate is adequate with everything maxed out (even with the Hi-Res texture pack). The much-touted Diablo 3 is almost seamless (aside from some minor pixel artefacts), although you’ll have to knock the quality settings down. Our beloved Galaxy on Fire 2 also runs well and looks great, although the menus and text are too small.

Bear in mind, when the full size-screenshots are viewed on a non-retina display, you’ll see pixels if viewed at 100%, and will miss the point completely if you scale them. So, make them 100% (they’ll be cropped), and stand back for the full effect.

Even if you ignore the native resolution, and stick to 1920×1080 (which seems to strike the best balance between compatibility, performance and quality), almost all Mac games look good and play well. 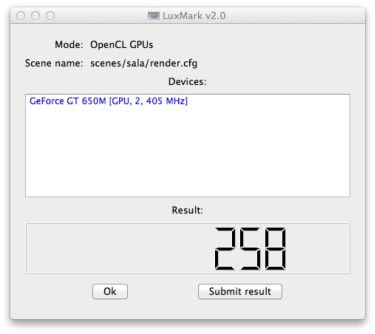 Other things to note are that the SSD drive makes everything load much faster, and keeps the temperature down somewhat. The battery life estimates range from 5 to 8 hours. (my mistake, it does still have backlighting), but not, I suspect the optical drive. Colour rendition has improved, and there’s less glare.

In conclusion then, this is certainly one of the best gaming laptops money can buy (certainly if you get an external mouse for it). We’ll do a follow-up regarding how it performs in Boot Camp in the near future.