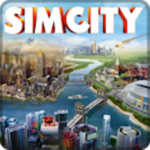 Control Command Escape has suspended coverage of this game. You can read why here.