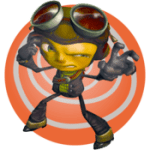 From the creator of the Maniac Mansion and Monkey Island series, Psychonauts is the thinking man’s (or woman’s) platformer. Yes, the gameplay is essentially jumping about, bashing creatures on the head and collecting power-ups. Yes, there are parts where it’s tedious and frustrating. But it’s so refreshingly novel (even considering it’s 7 years old!) that none of that really matters.

You control Razputin “Raz” Aquato, a recent addition to the Whispering Rock Psychic Summer Camp, who is trying to become a psychonauts. Psychonauts being individuals who can enter the minds of others as easily as going to a fairground. This basic premise sees Raz battling the accountant-inspired and other denizens of various characters’ minds, collecting and using psychic powers and even tidying up emotional baggage along the way.

It’s beloved by fans everywhere, was voted one of the “Best Games of 2011″ on the Mac App Store, and has won numerous awards. Play it and you’ll see why straight away.

The game runs smoothly on pretty much any system, thanks in part to it continuing to receive updates from the developer in spite of its age. The art style is so lovely that the visuals don’t really look that dated.