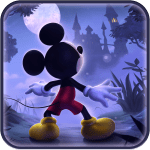 A re-imagining of the Sega Genesis classic, which sees Mickey Mouse platforming through the eponymous castle on a quest to rescue Minnie from the witch Mizrabel.