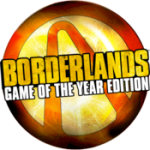 Borderlands takes the Diablo gameplay of mindless destruction and endless looting, then gives it guns and vehicles and puts it in an FPS. The cel-shaded visuals (which were supposedly a last-minute addition to make it stand out from the Fallouts) and fast gunplay make the whole thing feel like an interactive cartoon, but a joyous one nonetheless.

The gameplay involves choosing one of four archetypal characters (to fit different play-styles) and then going off and shooting things, collecting loot (in the form of weapons, shield mods and grenade mods) and cash, and completing missions (which generally involve shooting things).Along the way, you’ll also gain access to some skills (such as being able to deploy an automated turret) and weapon-mounted vehicles (which make short work of the inhabitants the titular wasteland).

The original game was well-received, prompting Gearbox Software to release several themed DLC packs, which increased the character level cap, and addressed one of the main complaints with the base game (a lack of variety of enemies and locations). Fortunately, the Mac “Game of the year edition” includes all the DLC, giving you a lot of content at a reasonable price.

Despite having a wide range of graphics options available, it’s very difficult to configure the game to run smoothly. Even at relatively tame settings, the game doesn’t run particularly smoothly on the ATI Radeon HD 5770. It probably doesn’t help that the Windows version was thought of as a pretty shoddy console port, and here the Mac port of that doesn’t fare particularly well.

The game is best played co-operatively with others. Doing so will boost the strength of the enemy critters, but will also increase the power of the rewards earned.

Assuming you don’t use the LAN mode, multiplayer requires the use of the third-party GameRanger client, which requires upgrading from the free version if you want to use voice communication (needless to say, everyone you want to play against will also need to be running GameRanger too), but at least will work cross-platform.

I agree that the MAS version of Borderlands can be very inconsistent with how it performs on different hardware with different settings. The real shame is that over a year ago, The Porting Team released a Mac wrapper for the PC version that actually works *better*. Usually Feral makes pretty good ports, so I dunno what happened here.

It turns out that if you disable “dynamic shadows” the frame rate more than doubles, so there must be an issue with the way it has been implemented here.