Here’s the thing: this is an area where Apple isn’t leading the charge, and can sit back and learn from what others have done. There’s Steam, there’s Xbox Live, Sony PSN; hell, even the almost universally hated EA Origin all have something to teach Apple about building a portal for gamers.

But for whatever reason, Apple chose to ignore everything else and give us Game Center. How bad is it? Let me count the ways.

There are 6 games listed as having Game Center support as of right now. To make matters worse, arguably only two of them are not straight up (hateful, hateful) iOS ports. 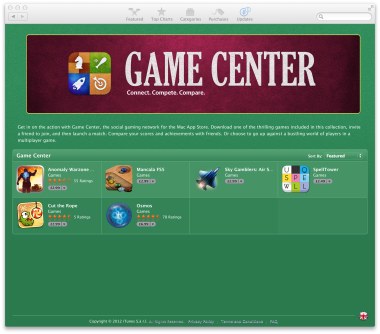 See if you can spot which two

At launch, the Xbox 360 had 18 titles available. Maybe that’s an unfair comparison. How about this then: the Xbox Live Arcade had 10 titles available at launch. Also interesting to note, was that of those, 2 were made by Popcap, no stranger to Mac development.

Apparently realising that not many people really use Game Center very much, Apple gives you the ability to find your friends through from your contacts. But if that fails to yield results, they fall back to just finding anyone who has a game in common. Then, I guess because that’s too complicated, it will just recommend that you become friends with completely random people.

I don’t know this person

Ok, that’s not strictly true. There’s the benefit of playing SpellTower with someone who has it on their iPhone, and you can see how few Game Center-enabled games you have installed. But so much seems to be missing, I don’t know why any gamer would ever launch the application in the first place (let alone a normal person).

EA’s Origin, heavily criticised as being behind with the times, still manages to include an in-game overlay (with a Game Center-enabled game, there’s just a button on a game’s menu screen to pop-up a Game Center window).

Let’s look at Steam, which is extremely popular, and of course has a Mac version. Here you’ll find mod support for certain games (Steam Workshop), voice chat, instant messaging, a screenshot manager, and a built-in community. Yes, most of those are available through use of FaceTime or what have you, but as any gamer knows, running lots of applications in order to play a game with others is not optimal.

4. You can’t even choose your photo

Ok, I’m exaggerating again. You can choose your photo, if you want some “default” picture of a cute animal, or if you want to take a picture with your webcam. There’s no browse button, so your only other alternative is to hope it shows up in the mysterious “recents” section. 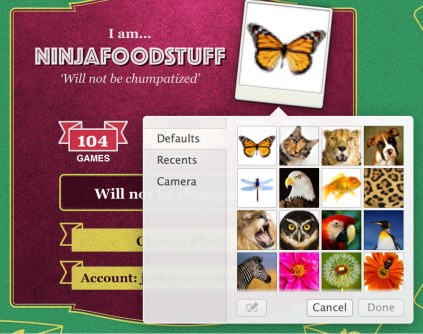 Maybe this is a bit harsh, it’s only a 1.0 release, whereas Steam is currently at 12 and even Origin is approaching a 9.0 release. But it’s hard not to be skeptical when there’s one feature that is there that works extremely well: clicking on a game in order to buy it.

I agree on much of this, but the biggest problem is lack of support. It took weeks for the Home page to file all of it’s spots for Game Recommendations.