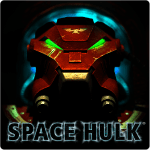 A turn-based strategy game set in the Warhammer 40K universe, where you’ll guide a squad of Space Marine Terminators through…

I used to play the Space Hulk board game (which this is based on) many years ago. I don’t really remember it at all. That’s Ok though, as I don’t think I enjoyed it as much as I enjoyed Full Control Studio’s translation to bytes and pixels.

Space Hulk is set in the Warhammer 40k (W40K) universe, and being as this is the first W40K game to make an appearance on Mac OS, that deserves some explanation. Simply put, it’s the Warhammer fantasy universe pushed into the future, with Orcs becoming Space Orks and humans becoming The Imperium of Man, a dogmatic, technology-worshipping empire. There have been several video games based in the W40K universe (most notably the cross-platform third-person shooter, Space Marine, as well as the Windows-only real-time strategy, Dawn of War) and beyond that there’s an absolute ton of source material to draw on.

Space Hulk then, is based on a very small corner of the universe. A Space Hulk is a derelict spacecraft (or collection of derelict spacecraft). In the setting of the game, you control a squad of Space Marines (heavily armed and armoured genetically-modified super-soldiers) investigating a Space Hulk floating through deep space. It’s also home to a swarm of Genestealers though, who are a group of hive-mind creatures that are like a cross between the Zerg and Alien.

You must lead your squad through a series of missions, each time coming up against the Genestealers, trying to complete an objective (get everyone to a certain place, kill X number of enemies, and so on). The game takes place on a grid-based map, defined by doors and walls. Doors can be opened and closed (damaged doors can be smashed open, but there’s no way to seal a door yourself), and your marines can move, shoot, go into overwatch, defend, do a bunch of other weapon-related stuff and, er, trade (mission-specific) items with each other. Everything your marine does costs action point. Moving one square forwards will cost you an action point. Moving backwards costs you two action points. Turning costs you an action point. Special abilities like defending or going on overwatch will cost two. Then as you might expect, opening doors, shooting, unjamming your weapon and so on each cost you a point. The game is not very generous with action points either, with each of your squad each getting four points per turn each to spend. The twist then, is you get 1-6 command points per turn, which can be distributed between your squad members as you see fit to add to their pool for that turn.

There’s a big random element to the game, with outcomes being calculated through simulated dice rolls (indeed, reading the results in the message window actually teaches you more about how the game works than anything else). It’s quite tough at times, with your Space Marines typically succumbing to a Genestealer in a single hit (even on the lowest difficulty setting). Your Space Marines definitely pack a punch, but the Genestealers, being as they spawn endlessly, always have numbers on their side. Space Marines need to be kept out of harm’s way, and that means attacking from a distance whenever possible (Genestealers have no ranged attacks). There’s also an odd mechanic whereby you don’t know exactly how many Genestealers are at a given location until one of your Marines gets a visual on them, but it seems like something that hasn’t quite translated well from the board game (though I honestly don’t remember how that used to work).

There’s a degree of tension, though perhaps not as much as I’d have liked. Often I was subjected to the feeling of becoming overwhelmed, engulfed in a swarm of Genestealers. Speed therefore was always the best tactic, but this was actually counterpoint to the slow, lumbering movement of the Space Marines themselves, who expressed no sense of urgency. The painfully slow animations of the Marines were a real problem for me until I realised I could actually just issue orders to other Marines without waiting for the first one to reach his destination.

Those of you who have been following my reviews for a while now will know that good pacing is very important to me in games. Games that break the gameplay apart, giving you things to do between the main gameplay, such as tinkering with stats, crafting and what-not, or just giving entirely different gameplay mechanics every now and then will always score (imaginary) points with me, because they help prevent the core gameplay, no matter how good it is, from becoming stale, and hold my attention for longer periods (naturally there are some games that go in the other direction and put too much emphasis on the metagame, so it’s a delicate balance). Space Hulk has very little pacing. Barring a few weapon variants, you’ve seen everything the game has to offer by the end of the tutorial. Indeed, the tutorial seems to end rather abruptly, after showing you the basics, you’re simply referred to the “Librarium” (accessible only from the main menu), the in-game encyclopedia to learn more advanced concepts and what the differences between weapons are.

So this is the point where I tell you that all that doesn’t matter, provided the core gameplay is good enough.

But it still seems to matter.

Part of this I suspect may be down to budget, but I think ultimately it’s in the strict adherence to the board game roots. Literally nothing happens between each of the (12 plus tutorial) maps, the maps themselves have very little to in terms of variety (it’s always doors, corridors and entry points) and it gradually started to feel like something I should play on an iPad instead, playing a level at a time and then doing something else. In fact, I found myself thinking about the Warhammer iOS game far too often whilst playing this, and remembering that although that game has a lot of the same positives and negatives as this, it does at least have a rather sizeable metagame, where you can tailor your squad to your specifications, something I feel very strongly that Space Hulk is lacking. The game tries to show you something new every level, whether it’s a new weapon or new objective, but nothing ever feels different, barring the introduction of a new enemy type, which happens once. After a couple of successful missions you’re given command of an additional squad, but this is largely meaningless, and just becomes X more Space Marines to sacrifice (not to mention eat into your command points).

Though the graphics performance was generally good, there were several issues with the interface. First of all, you can’t scroll the map up using the mouse. Trying to do so results in the OS X menu bar popping up instead. You also can’t scroll to the side if you’re using multiple monitors, as the mouse isn’t locked to the window.

Finally, there were some odd glitches, like parts of the GUI overlapping each other in rare cases, or the sound frequently cutting out. Thankfully there were no crashes or anything serious.

There’s no music during the levels themselves, and though the animations quality is passable, the same animation is shown over and over again for killcam shots (these can be turned off though).

The game supports hot-seat and online multiplayer, though as others have noted, part of the strategic elements (when playing as Genestealers at least) may be lost when playing hot-seat mode as the other player will probably see what you’re doing.

That said, I do wonder if most of the potential fun within the game is to be had with online multiplayer.

Currently the only DLC available is a skins pack for multiplayer.

Last updated August 19, 2013 Details of everything we received from publishers as part of this review are available on out integrity page
Gameplay Video
Steam