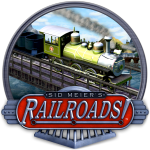 Originally released in 2006 as a successor to the Railway Tycoon series, Railroads is the latest in a series of games to be dusted off and allowed to run on Macs. The Tycoon series has always been about creating and maintaining a particular industry, in this case, building railway lines and using them to move passengers and cargo.

Right at the start, the opening cut-scene paints a picture of nostalgia. A caricature of Sid Meier, dressed as a train driver, looking in wonder at a train set. In a sequence that will prove to have little to do with the game proper, it conjures up the notion that you’ll be given a big box of train parts and off you go. The reality however, is that you end up playing a game that’s more about balancing books and crunching numbers than anything else.

The game begins with you given a sum of money and a town or city with a bit of track. The first step is to connect the starting track to somewhere else– preferably somewhere that either generates a resource that is needed by your starting town, or is itself in need of something that your town produces (or ideally, both). You lay down the track, create a depot (or annex) and then create a train route between the two, selecting an engine and a number of carriages for freight, passengers and mail.

This is where the economics kick in. Various factors will affect the profitability of the route, such as the time taken for loading and unloading, the incline of the route, how many carriages are attached, maintenance costs and so on. You’ll spend a lot of time staring at balance sheets, therefore, and you’ll also spend a lot of time waiting for your bank balance to replenish itself after laying down new track or buying new buildings.

Track-laying is an integral part of the gameplay, and it works by connecting to an existing track (sadly, you can’t plan ahead by constructing isolated tracks), and moving the mouse to where you want the track to go. You can certainly just make the tracks run in a straight line, with tunnels and bridges constructed along the way as needed, but this will greatly add to the expense. Better then, to find the path of least resistance, clicking at various points along the way to anchor the railroad’s shape. If you’ve ever used spline-based drawing tools, this process will feel like second nature; if not you’ll have to get used to the idea that bits of the railroad you’ve already carved out will change shape in order to maintain a smooth curve between the points. This aspect of the game works very well and it can be fun to draw out complex routes (assuming you don’t run out of money) across the large maps.

Creating trains to run along those routes is a lot less enjoyable, mostly because the interface doesn’t seem to work very well. What you’re supposed to do is click the “buy train” button. This pulls up a map with all of the available stops you have so far. Click on the starting point for the train, and add a number of passenger, mail and goods cars to the train (meaning the train will start by loading up these items before departure). Then you click the next stop on your route, where you can change the carriage configuration. You can stop there, in which case the train will shuttle back and forth between the two points. But for maximum efficiency, you’ll probably want more stops along the way. The biggest issue with this process is the utter lack of information available. On the main map, when you hover over a town or city, you’re shown what that place produces, what it needs, and what it can convert. Hovering will also popup indicators as to other places that demand goods that the place you’re looking at produces. All fairly helpful (although the tooltips don’t always trigger). None of this information is available when building a train route however, so you have to just remember exactly what you need to deliver where, or just keep switching between screens. Likewise, there’s nothing really obvious to give you any indication of the number of each type of carriage you should be building.

But the biggest issue with the interface is the way double-tracking works. When you have two (or more) trains sharing the same track, the chances are they will at some point run into each other, at which point they’ll both stop. Unless you happen to have built some double-track somewhere along the route (the double track is literally a short length of track that can be added in parallel to an existing track, and you can actually stack these multiple times). But, even if you have built the double-track the trains just stop, staring at each other for a while before one of them half dissolves and the other one ploughs right through it. At no point is there any visually indication that your double-track functioning correctly, leading to you just staring dumbly at two trains in a standoff and wondering if one of them is going to move at some point. (Update: as commenter Malcolm points out below, it’s possible I have misunderstood the way double-tracking has to be set up).

Assuming you’re not put off by the sheer scale of the financial busywork and can get past the interface, you’ll find there’s a lot else to do. Newspapers will flash up from time to time with quick ways to earn some extra cash (assuming your railway is big enough at that point), you can bid at auctions for local businesses, such as smelters which will turn one type of cargo into another. You can also bid on patents that will flash up, and will provide you with certain bonuses for 10 years of game time. The trains themselves have upgrades unlocked at key moments, at which point you’ll probably scramble to refit your existing stock. Most interestingly (and also the most far removed from the idea of, you know, playing with trains), you can buy and sell other player’s shares. In a tight spot you can sell your own shares for a quick cash injection, and in order to win a multiplayer game, you’ll probably want to buy up as much stock of the other players as possible.

Each of the scenarios (which thankfully aren’t just limited to the US, spanning places such as Europe and even Santa’s Grotto) has a set of victory conditions, although strangely there’s little to indicate that you’ve completed them as the game continues until reaching a predetermined year. There’s a tutorial, but it really doesn’t do a particularly good job of explaining many of the games mechanics; it’s gives you information in a series of text popups and at some points it’s possible to actually progress through the tutorial without having completed the tasks it sets you, making you wonder what you’re doing wrong.

It’s a game that really should have been more about the train-building than the empire managing (a balance that Theme Hospital managed to perfect). There is a “train table” mode, which basically removes all the objectives and gives you unlimited funds, giving something of a sandbox environment to mess around with, but I’m not sure that people would be best served by buying the game just for that mode. Instead it’ll ultimately be relegated to a specific niche (for people who want to poke around with complex economics with the trains as window dressing) rather than for people harking back to the model train sets of their youth.

Though the game performs well, even on a low-powered MacBook, it looks old. Some of the graphics look low-resolution, whilst the text can almost be unreadable at 1920×1080 resolution on a 23-inch screen. We encountered several glitches with the user interface, most noticeably with tooltips not activating some of the time.

Assuming you don’t use the LAN mode, multiplayer requires the use of the third-party GameRanger client (for the retail client, whilst the Mac App Store version uses Game Center), which requires upgrading from the free version if you want to use voice communication (needless to say, everyone you want to play against will also need to be running GameRanger too).