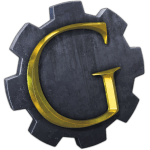 Atmospheric audio and visuals, and a solid foundation for the many mods that will undoubtedly be available make Legend of Grimrock a must-have, in spite of any failings the campaign might have.

I haven’t been scared playing a game in years. It’s not just the spiders though. There’s an atmosphere of evil that permeates the entire game. Most of it is probably due to the developers (sadists that they are) unleashing devious traps at opportune moments, and never quite letting you rest up. But I’m getting ahead of myself.

Legend of Grimrock harks back to the dungeon crawlers of the late 80s and early 90s, notably Dungeon Master and Eye of the Beholder (a game which I have fond memories of playing, but probably wasn’t all that good, and I certainly never completed it), whereby you create a party of adventurers and attempt to make your way through a vast grid-based dungeon, trying to avoid falling prey to the traps and creatures that lurk within.

In Grimrock, the game begins in a similar manner. You create a party of four, chosen from four distinct races (human, minotaur, lizardperson and insectoid) and three classes (fighter, mage or rogue) and set the stats and traits for each; or simply take the premade party instead. Creating a party can be a bit tricky, given that you don’t know what to expect, and the magic system is a little… odd, so you probably want to avoid loading up on wizards.

Once inside the game, you see the world from the perspective of your party (you never actually see your characters in the dungeon itself), who move uniformly as a group, but still have specific positioning (two are considered at the front, two at the back, and this does have a strategic role). Needless to say, this can take a bit of getting used to. You move with WASD, turning left or right with Q and E respectively.

Each character in your party can equip and carry various items and bits or armour, and carry a weapon (or other utility) in each hand. This sounds like a lot but it’s not as easy as it sounds. Magic users will need a wand in one of their hands in order to cast spells, your fighters will probably want a shield, and ranged weapon users require ammunition to be loaded into their free hand. In addition, much of the dungeon is dark, so at least one of your number will need to carry a torch (which have limited use, but can be collected from sconces). All of this means that you need to manage those eight hands very carefully.

The way that the combat works is that you right-click on a weapon to use it. Positioning comes into play here. Front-line characters will be able to hit anything immediately in front, whilst characters at the back must have a ranged weapon (or one with reach, such as a spear) to hit anything. Similarly, characters at the front will take damage from the front (thus shielding more vulnerable members at the back). Attacks are on a cooldown, and frustratingly this cooldown will activate even if you mis-click (there are no hotkeys for the attack buttons), such as when right-clicking on a torch carried by a party member in the back row.

You can re-order party members at any time, and this is actually an important skill to master early on in the game when weapons and armour are in short supply, meaning that you’ll want to retire almost-dead members to the back until they recover. Characters can (and likely will) die when their health is depleted, and although they can be resurrected at certain points, these are few and far between, often necessitating a reload. Your party can rest to regain health when not in danger, but as a trade-off they will get hungry (each character has a hunger meter that slowly depletes over time, and must be given some of the scarce amount of food that can be found, imparting a sense of urgency to the game).

Your characters also have an energy meter, which is used up when attacking (less of an issue later in the game) and casting spells. The way that spellcasting works is that you right-click on a wand and can select from up to 9 runes, then cast the spell. This is (probably deliberately) a time consuming process, and you’ll find yourself frantically clicking whilst your fighters wait to attack. What makes the situation more annoying is that you either have to figure out the various spell combinations for yourself, or else wait until you find a scroll with the formula at some point during your travels. Personally I’m not convinced that a level of challenge should come from memorising spell components or accurately targeting attack buttons, but maybe that’s just me.

Aside from those quibbles, the interface is well though out. The screen can be dragged around with the right-mouse button to look around, you automatically hoover up any thrown or fired ammunition that’s on the ground (all ammunition can be reused, which is just as well as it’s in short supply), and you can manage your inventory with containers you’ll find later on. Click on things you see throughout the dungeon to interact with them, click an item in the top half of the screen to throw it, click in the bottom half to drop it. Yes, I’d forgotten that this was the way it was. 20 years later, it’s still an intuitive (if rarely utilised in other games) mechanic. I also love that you can annotate (or completely disable, if you prefer) the map. Shameful that for most modern games that’s not possible. Some more modern conveniences also make their way into the game, such as regenerating health (albeit at a very slow pace), and some limited crafting (in the form of potion-making).

With all of the RPG-heavy mechanics, the game itself seems strangely skewed towards puzzle-solving more than anything else. The puzzles naturally involve pulling levers, activating pressure plates, and finding hidden buttons on walls, and some will lead to one of the games many “secrets”, rooms that typically contain a bonus item. It can be a lot of fun to clear a floor of the dungeon, and then go back and try to find a way into those rooms that appeared just out of view, or those doors you never managed to open. There’s also an odd thing about the game which is that you’re frequently rewarded for (deliberately or not) falling into pits.

The complexity of the puzzles quickly ramps up, involving teleporters and timers, which is all well and good, but it becomes impossible to progress without solving many of them. Case in point: at the start of the game, there’s a button partially concealed on a wall (all the hidden buttons in a given tileset look the same), which when pressed will open a hidden door. Later on however, you must find such a hidden button just to proceed to the next area. It would have been much better if the levels had been designed in such a way that you could merely skip past most of the puzzles, only trying to solve them if you’re after some extra loot (or fancy a change of pace).

So it was that after about 6 hours in to the game, a lot of it was starting to grate on my nerves. I was kind of ok with the time-based levers, but it was becoming annoying to repeatedly lose battles, in spite of having well-equipped and decently skilled characters. At this point I tried a different approach, which was to rely on kiting (whereby you keep moving out of the enemies attack zone, wait for them to move into yours, hit them with everything, and then repeat the whole process). This approach made the combat much easier (particularly as you typically move faster than the enemies), but it felt kind of uninspired.

So I ventured on through the dungeon, pondering whether the puzzle elements sit well with the more twitchy ones. When I wasn’t terrified at least. I think now that the lid has already been blown off the game, what with the Windows version having been around for months and Youtube already saturated with walkthroughs, maybe the puzzles are not so much of an issue. If you get stuck, you can easily find the solution posted somewhere, and certainly if you’re not a fan of puzzle games then you should just go ahead and do that, enjoying the game for its other merits (by the same token, those who want to play the game just for its puzzles should absolutely dial the difficulty down to “easy” at the beginning, as this can’t be changed later on).

But on the whole, yes, it’s an enjoyable experience that I found myself wanting more of. I wanted to explore deeper depths to see what horrors lay there, much in the same vein as with Dungeons of Dredmor. After having gotten used to modern dungeon crawlers with their piles of randomly generated loot and fractal maps, it’s actually incredibly refreshing to play a game that’s as planned out and directed as this, although perhaps the true benefit of the game will be in what the community can do with this fascinating new playground.

Don’t let the old-school nature of the game fool you; this is an exceptionally good-looking game. Although the dungeon is entirely grid-based, and you’ll see many of the same walls over and over again, things start to get an awful lot more interesting the deeper you go. The lighting is absolutely masterful, as if they’d employed a cinematographer solely for the purpose. Special mention must made made of the audio, which provides useful cues and really aids your spatial awareness.

In all respects the game runs perfectly (which is probably due in part to the focused Mac beta period that the developers had).

Perhaps most importantly, the game comes with a (gasp, Mac-compatible) level editor. Having been out for a while on Windows, there are already many mods available via the Steam Workshop (for Steam versions of the game), the Grimrock Nexus or the official forums. Mods can be manually installed to ~/Library/Application Support/Almost Human/Legend of Grimrock (or automatically via the Steam Workshop). It appears that all mods should be Mac-compatible.

There are already a great deal of mods available, including remakes of the aforementioned Dungeon Master and Eye of the Beholder games.

You can also find various portrait packs on the official forums, and don’t forget to look in ~/Library/Application Support/Steam/SteamApps/common/Legend of Grimrock/extras for some bonus goodies.

Last updated June 19, 2013
fantasy gog.com puzzle rpg steam steam workshop
Details of everything we received from publishers as part of this review are available on out integrity page
Gameplay Video
Gog.com Steam