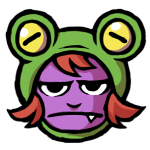 An adventure-puzzler featuring a wacky cast, secrets, and leaderboards for speedrunners.

Ittle Dew is a decent puzzle game, but a terrible action game.

But it’s very much a puzzle game, in the vein of Macguffin’s Curse. If  Sokoban puzzles don’t interest you in the slightest, it’s safe to say you can give this a pass. If you’re not put off by sliding block puzzles and you’re not adverse to a little dodging and whacking of nasties, then you’re in for a treat. Everything about Ittle Dew is done extremely well.

In addition to the “slide block away from exit” style puzzles, things quickly ramp up with various spins on the formula added rapidly. There are ice blocks that once pushed, continue moving until they hit an obstacle. Oh, and they can be melted with fire. There are bombs which can break through damaged sections of walls, and will also detonate other bombs. And bombs are movable blocks. Things are interesting at the point you replace your basic weapon (a stick) with a fire sword at the start, but when you get the game’s equivalent of the portal gun? That’s when you’re in for some interesting (and head-scratching times).

But then there’s the action side of the game, which isn’t so great. Enemies, for the most part, are constrained to moving in a grid, but you are not. This frequently leads to situations where you stand in a spot and wait for them to come at you, and miss, because you were a fraction of a tile too far away for the shot to connect. Or you’ll be busy solving a puzzle, whilst getting shot at, which is a situation that adds more annoyance than it does irritation. Admittedly, some of the boss sequences do make good use of this union of genres, but more often than not, I just wanted to do the puzzle bit first, and then I’ll go do whack-a-mole.

The artstyle is cute and the characters are doubly so. The game is steeped in RPG tropes, especially of the Zelda variety, which it constantly pokes fun at (such as when new enemy introduces itself). But although from a distance you’d mistake it for an RPG it would be wrong to think of it as one, there are no meaningful choices (tactical or otherwise) to be had. There’s an item shop, but really you’ll be buying everything from it anyway, and the only real concession to RPG games is in the overworld map.

Oh good grief, that map. When you’re inside a puzzle area, there are areas blocked off, that you must return to later, metroidvania style. This is perfectly fine, and there’s a hotkey to bring up a detailed map, which you’re able to unlock everywhere that has a treasure chest (so, everywhere with a puzzle you’ve not completed) for that area at certain points. The rest of the time, you’re travelling between areas, in a spaghetti-like, confusing maze of paths and tunnels, the likes of which have not been seen since Call of Cthulhu. All you want to do is get from puzzle A to puzzle B, and the game makes even this needlessly challenging, even though there’s a map and some vague signposts to help you find your way. At one point you’ll witness a “portal garden” get so full of doorways to different places that it serves as more of a joke than a way to revisit previous locations.

Ultimately though, it’s more enjoyable than it isn’t, and by combining the two genres, it neatly sidesteps any potential pacing issues. Usually there’s a point in a puzzle game, particularly a long one (this one clocks in at around 3 hours), where you tire of solving puzzles and have to stop. Sometimes you’ll return to it later, sometimes you won’t. Ittle Dew feels very well paced, thanks to the breakup of action bits. However, it means that it gains a new problem; the one shared by many puzzle platformers: you’ll finally be on your way to solving a particularly intricate puzzle, and then run out of health and have to redo it all over again. Not fun.

On paper. Ittle Dew has got everything a good game needs. It’s got brains, looks and personality. But it’s got an awful lot of Sokoban.

The only issue I had with the game was the keyboard mapping. The game is probably best suited to a controller, but the default configuration didn’t work, and trying to configure mappings in the Unity launcher is a painful process in and of itself. This meant that I used keyboard controls instead, which were adequate, but again the default mapping just didn’t feel right, especially in terms of using the portal wand.

Last updated August 16, 2013 Details of everything we received from publishers as part of this review are available on out integrity page
Gameplay Video
Mac App Store Gog.com