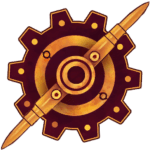 When I first started Guns of Icarus, I was mellowed by the soothing music and dieselpunk visuals. Three minutes later, I was in a state of panic, surrounded by destruction, incoming artillery and everything on fire.

Another in the ever-growing list of Kickstarter success stories, the game is the spiritual successor to the largely forgettable Guns of Icarus. The art assets have been polished, and the focus changed to online multiplayer.

The story, such as it is, sees you as a member of the crew of a small (or not so small) airship, tasked with ferrying cargo across a post-apocalyptic landscape. But really it’s about taking to the skies and blasting your enemies to bits, whilst making sure your ship stays afloat.

You choose between three character classes (each with their own equipment loadout): pilot, gunner and engineer. You’ll serve in a crew of four, with the self-elected captain choosing the ship type and weapon loadout. Each class actually has access to the same equipment, but can take more of the ones they have an affinity for. So an engineer can carry 3 engineering tools, but only one pilot and one gunner tool. The equipment provides some bonus when used, for example the spyglass allows enemy ships to be tagged, whilst the DynaBuff Industries kit can be used to boost parts of the ship.

Once in the game, you’re placed aboard the flying vessel and can man the helm to pilot it, or jump on one of the guns and start shooting. The gunplay is satisfying, with many weapons having a narrow arc of fire, and others (such as the flamethrower) having limited range. There’s an infuriating pause when the turrets have to reload (or when you switch ammunition), and it seems that the position will lock during this process, so you have no choice but to wait it out. Much of the time you’ll find that you’re better off simply abandoning a spent weapon and jumping straight on another one.

As a pilot, you’ll need to be aware of your ship’s blind spots and attack cones (and those of your enemies ships) to give your gunners a fighting chance. As an engineer, you’ll be busy from the moment the enemy fires a shot, running up and down the decks, buffing, repairing and firefighting. The lowly gunner also has an important role to play, not just in aiming and firing, but in judicious selection of the proper ammunition type for the situation. There are five different types of damage that can be inflicted, each of which is effective against a different part of the ship, with stats for each published on the game’s website for would-be gunners to memorise.

It won’t be long before your own ship starts to take damage, and when that happens, well all hell breaks loose. Really loose. You’ll see indicators pointing towards damaged and destroyed components, which might be guns or ship components. And it’s likely that parts of the ship will be on fire. At this point you’ll have to do what repairs you can to keep the ship in the air, let alone returning fire to the enemy. Each ships’ movement is modelled on its components, so if a rudder is destroyed then the ship will be unable to turn effectively. But the real damage dealers should be saved for the balloons, as taking these out will often be the quickest path to victory. Interestingly, your character is immune to damage, meaning that you only get ejected from a weapon that gets destroyed whilst you’re using it, and if you happen to tumble off the side of the ship, you’ll respawn a second or so later.

The game currently only features team-based deathmatch, so there’ll be other ships in the air that are friendly. However, it can be tough to spot which ones are on your side, as they are only identifiable by their colours (flags and balloons). The most effective way to spot enemies therefore is to have have a player on your ship (typically the pilot) use a spyglass to tag them, so you know what to aim for.

The game is only let down by some technical issues. Some of these are glaring, which can make the game seem unfinished. The bare-bones tutorial, if it can really be called that, doesn’t do a decent job of explaining the game mechanics to new players. It was a while before I figured out I needed to use the number keys to switch ammo types (which I ashamedly only knew was even possible from a loading screen tip) whilst manning a gun; conversely, there was constantly a message on screen to tell me to use said number keys to change equipment to access a fire extinguisher (which is actually unavailable in the default starting class). The game’s website actually does a rather good job of explaining most of this very clearly, it’s just a shame this is something that seems to have been overlooked within the game. There are also some odd bugs like spawning on the ground (rather than on the ship) before being teleported onto the ship, some missing description text, and the fact that everyone’s score at the end of a match is always zero.

There’s still a lot to be done. In particular, a lot of the metagame, such as levelling up, is not implemented yet, and previously promised features such as crafting have yet to make an appearance. The developers are taking a hands-on approach, and are keen to reassure everyone that these will all get worked out as soon as possible (launching the game in the midst of hurricane Sandy certainly didn’t help matters), and that there’s lot more in the works, so that the game as it is now, will be rather different from the one you might be playing in a couple of months time. There’s a microtransaction system (which is not currently active), which allows you to buy purely cosmetic items for your character. Clearly, the aim is to grow the metagame as much as the game proper.

If you don’t mind the ongoing construction work that’s taking place, you’ll find an elegant and simple team-based multiplayer game waiting for you. Muse games have brought together some great core mechanics, fun (and at times exhilarating) gameplay and fostered a great community.

The developers are keen to stress that the game is better when played as a team, and my experience confirms this. When joining a random game, there’s a distinct lack of cohesion, with other players unsure which ships to target or what to repair. Having a good pilot is absolutely essential, or else as a gunner you’ll find yourself getting irritated because the enemies are just out of your line-of-sight, or the ship is turning away from where you’re trying to aim, forcing you to needlessly hop between different turrets. The captain is also important in that he or she decides the type and configuration of the ship you’ll be on, so you’re in trouble if they’ve decided to load it up with nothing but flamethrowers.

When you do play as part of a team (or at the least, a team where at least one person is using voice comms to coordinate everyone), it’s a very slick, fun experience. The community as a whole seems to be very mature, with the developers attributing this in part to their “community ambassadors” program, whereby experienced players essentially become in-game moderators, and help others to learn and enjoy the game.

There’s a “practice” mode which lets you play the game just with AI characters, but bizarrely doesn’t seem to give you anything to shoot at.

Everything in the game runs smoothly, but also shockingly fast. You can go from either side of a galleon in mere seconds, which is so unusual it took a while to get used to, especially given the otherwise slow ship movement and dreamy music.. The visuals are better than you’d expect from a multiplayer game, given that you never have time to properly appreciate them. There’s something divine about seeing ships ever so slowly edging out of clouds, and moments like that are more impressive than the fires and explosions and smoke and falling debris (ok, the falling debris is pretty special too).

Note: although the game supports a controller, it didn’t work very well on our system with an Xbox 360 Wireless.

Last updated June 19, 2013
action multiplayer steam steampunk
Details of everything we received from publishers as part of this review are available on out integrity page
Gameplay Video
Steam