Wasteland 2 is a sequel to the 1988 RPG Wasteland and the post-apocalyptic predecessor to the Fallout Series. It will…

20 minutes of… is a series in which I document my experience playing a particular game for 20 minutes. This should not be taken as a full review, rather a verbal “let’s play”, except without all the shouting and hyperactivity.

I– do I need to say this? I feel like I should say this– loved both the original Fallout games. I loved everything about them, apart from the start of Fallout 2 and the fiddly interface.

I have not played the original Wasteland- it is in my Steam library but it just looks godawful in every possible respect. But who cares! Wasteland 2 is Fallout 2.5 in everything but name, or so I’d heard. I have spent 3 hours with it so far, and have vehemently hated every minute of it. I’ve written the game off at this point, so it seems only right that I should therefore play the game for another 20 minutes and see if it can win me back, or just subject you to a couple of thousands of words of ranting.

Either way suits me just fine.

There’s a stupid joke about DLC on the game’s main menu screen. It’s juvenile and obnoxious, and I can’t believe it’s in a game with this sort of budget. Kickstarter, eh?

At this point, I have gone through the character creation process four times (once for each person in my squad). Advice I’d read elsewhere was to put points into intelligence for all my characters, because that leads to more skill points down the line, and (allegedly) by the mid-game skills are king. Each of my characters have names, but I’ll be damned if I can remember any of them. There’s sniper-guy, pistol-gal, bruiser dude and laser lady. We’re all together in the first mission scenario, one of (I think) three possible starting missions out in the Wastelands. The 3 hours that I’ve already invested into the game involved listening to some guy talk, and then a series of random encounters whilst wandering on the map.

A lot of restarting too, as I’ve been losing the game on some of those random encounters, and then again and again on the mission map I’m currently on. The weirdest thing about this is that when I reload the game, all the enemies are completely different. I guess this is deliberate, either to make for a different experience each time, or to prevent people from reloading repeatedly to get around bad luck. I hope it’s the former, because the combat is utterly unforgiving. Previously when I’ve loaded the game from here, I’ve been ambushed by plants and/or insects, who have overwhelmed my pathetic squad in a matter of turns. One time I was ambushed by anthropoid rabbits who proceeded to punch my pathetic squad to death in a single turn. Let’s hope it’s not those guys again.

As you can see from the screenshot, the interface is relatively minimalist compared to its 2000-era heritage but even so I wouldn’t exactly call it “restrained”. The dot-matrix style typewriter (used for log messages) that fills up a sixteenth of the screen certainly lends some character but can’t be removed entirely. Don’t ask me what the widget in the top-right is for; I haven’t a clue.

It has all the hallmarks of the infinity-engine games from the last decade, namely never being sure exactly what’s going to happen when you click somewhere. Sometimes the whole squad’ll run to where you click, sometimes only one of them will. I suspect the cues are there somewhere, and I’ll get used to this as I did when I first played Baldur’s Gate, but to my 2015 brain it’s too convoluted. Walking a little ways in triggers a cutscene where someone explodes, Alien-style. Despite having watched it many times by now (there’s no apparent option to skip), I have no idea what’s going on. I realise I can try and make sense of it by heading over  over to the in-game journal, which tells me:

We just ran into a human… at least, it might have been a human. He or she had gross swellings all over their body that burst like giant cysts. What is going on here?!

Conveniently that’s also fairly representative of the quality of writing to be found in the game, you can pass your own judgment on that. I should also point out that there’s no objective marker, meaning you have to pay attention or scrutinise the journal to find out exactly what you need to do. Not that this is necessarily a complaint at this point.

There’s no way to interact with the remains of the victim. Wait, that sounds very wrong indeed. What I mean is, in other games you might expect to have your character search or notice something about the victim close up. Not so here, there’s no reaction to the situation from my squad as the cheerily march over the puddle of the former human.

Moving into the next area gives me no less than three notifications (these are clicked on and provide tutorial messages) on the topics of ambush, firing modes and cover. I’ve read these several times now, and of note is that there is very little cover to make use of. Which actually doesn’t seem to matter anyway because there’s a good chance the monsters coming up have melee attacks anyway.

And there they are. Some sort of giant maggots. In my successful random encounters on the world map thus far, my strategy has been to have my sniper shoot the closest enemy (which typically killed them in one shot), thus triggering combat mode whilst the other enemies were too far to do anything to my guys. Here I take the same approach. A single shot from a sniper rifle is enough to kill a man in this game. But not a maggot. It doesn’t even do 50% damage. So I’m down one sniper bullet, and facing off against at least four hostiles.

Before anything else happens, a giant fly travels from off-screen to hover in front of my squad and then spit poison over the others onto the one at the back. This then repeats for another fly, then the two maggots that I’ve spotted and one more from off-screen close in before it is my turn. I’m outnumbered and by enemies that are way tougher than my guys.

Shakes, my sniper, has run out of ammunition. His backup weapon is a machete. To rub salt on the wound, he’s trapped behind all the others so can’t even attempt to use it.

Tex has an energy weapon! It misses at point-blank range on the first shot but connects on the second. This does 5 points of damage. For reference, the Supafly he shot had 15 points of damage, now 10.

Pug is my melee guy. He fights unarmed, with each punch using only 2 action points. Potentially he can strike 4 times in a single turn, but I had to use two of his points getting him into position. He misses twice at point-blank range and connects once, doing 4 points of damage.

My squad’s turns are over. I was able to attack one of five enemies, reducing it to near-death. Now they get to act. It is my second turn. Pug is unconscious. I have to check the tooltip to find out exactly what this means, for reasons I’ll get into in a minute.

A temporary loss of consciousness, generally resulting from a concussion. An unconscious character is unresponsive and unaware of his surroundings. He will regain consciousness after a time, surgeons may facilitate the process by maintaining circulation and respiration. Revive with the surgeon skill.

The salient point is that he should be able to recover on his own.

Flooze misses at point blank range again and shoots Tex for 10 damage. Then her gun jams.

Tex misses at point blank range with his energy weapon. Both times.

Everyone on my squad is now at less than half health, two of them near death.

Pug has recovered from his unconsciousness.

Pug is attacked and gets the Seriously Wounded status:

A stuporous state often resulting from severe traumatic injury. A character in serious condition is unable to regain consciousness spontaneously. A surgeon’s assistance is required to prevent exsanguination or brain compression from a hemorrhage. Revive with the surgeon skill.

Here Is Why I Hate This Game

The first few times this happened, I continued the fight until the bitter end. One time I managed to win the fight with (only) one seriously wounded character. Based on previous gaming experience, I figured ending the fight would make everything better. Hoo boy was I wrong. What happened was there was a time limit of like 2 minutes before he bled out. Ok, so to prevent that I just need to get another character to revive him, like in almost every other game ever. Nope. You need a character with the surgeon skill. And even then it might not work. Otherwise that character is dead. You can trek back to the starting area to get another one, but as far as I’m concerned if you get to that point, the game is over. And given that I had no characters with the surgeon skill, because the game doesn’t make any bloody effort at all to mandate you have someone with this skill (actually, you probably want a team full of surgeons, because otherwise if your only surgeon gets injured you’re screwed anyway. So effectively, once any character in your squad has the bleeding out (or any similarly debilitating condition), the game is over, necessitating a reload. The game does not communicate this to you. Let me be clear. I am fine (to a point) with a game that is difficult. That you’re outnumbered by superior antagonists is not necessarily a bad thing; challenge in and of itself is not a bad thing. What I can’t stand is when the game does this through obfuscation, lack of instruction, or just wasting my time.

At this point, the absolute best thing I can do is go and start the game from the beginning again. Even if I were to successfully complete this battle, I would do so left with no ammunition, and my entire squad likely to be on low health. In other words, winning this battle might be at the cost of losing the next.

But, this is called “20 minutes of”, not “5 minutes of”, so as much as I’d like to just uninstall the game and never think about it again, I can’t call it a day yet. I suck it up and reload, experience the exploding cutscene for the umpteenth time, and then tried exploring a different part of the map to see if I’d have any joy… Different part of the map, more or less the same set of enemies (although no tutorial messages here for some reason).

This time I win! Except I don’t because one of my number is bleeding out. And another one is going through some weird cycle where he’s unconscious, then gets up, then apparently gets knocked out again by something invisible. So that’s fun.

I reload and go again.

I’ve reached the end of my patience now. There’s only one thing left to do 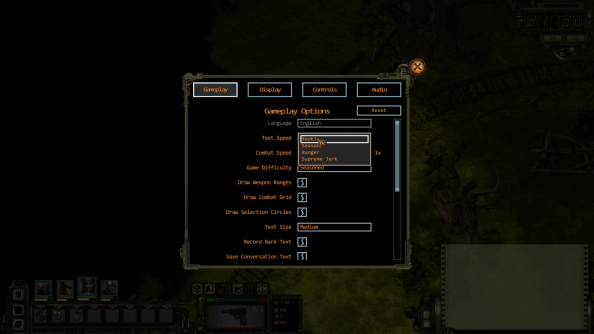 I do the unthinkable and lower the difficulty one notch to the lowest setting (of four!).

Now I’m killing things at point-blank range  with one shot, which makes all the other frustrating aspects of the combat palatable. Just.

A win with everyone alive for the first time in maybe two hours. Now I get to see what the rest of the game is like. 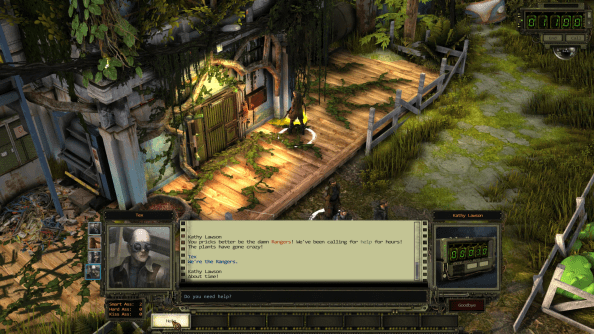 And just as things start to get interesting, it’s time to wrap up. I’m actually feeling like it might be enjoyable now that I’ve swallowed my pride and turned down the difficulty…