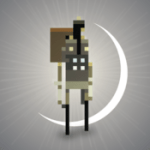 An unusual journey into a pixellated land, what Superbrothers lacks in challenge, it makes up in delight.

Putting aside the fact that it has a terrible name, and that (like the vast majority of so-called games on the Mac App Store) it started life on iOS, Superbrothers: Sword & Sworcery EP is critically acclaimed on both desktop and portable platforms. Billed as “therapy for acute soul sickness”, it’s essentially a point-and-click adventure game of sorts, with a very stylised pixel art look about it.

You control the protagonist who quickly acquires a magic tome that grants her magical powers. The game boils down to interacting with characters (through conversation and telepathy) and the environment, solving puzzles as you go.

There’s a bit of combat, although it’s little more than a case of timing attacks and blocks carefully. The game proper is broken into four acts, and between acts you’re actually expected to “rest” (in other words, wait a predetermined amount of time). This is something that may annoy you, but then this probably isn’t the game for you.

It can get a bit pretentious at times (given phrases such as “mythopoetic psychocosmology”), and nothing about it is particularly challenging (it’s just not that sort of game). There’s twitter integration (which actually stirred up a bit of controversy due to its overuse) which allows you to tweet any bit of in-game text (which was probably intended more as a self-promotion tool than a useful mechanic).

Probably the best part about the game (assuming the art direction doesn’t win you over) is the music. At times ethereal and relaxing, it can quickly ramp up to a breathtaking crescendo, and really helps to instil a sense of drama throughout.

The pixel art style is a very personal thing. At times the screen can look incredibly cluttered, at others it has an eerily beauty about it. Barring some occasional minor ghosting on the player character, we didn’t notice any major issues, and it seems to have translated well from touch-based controls to mouse.