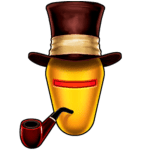 A procedurally-generated first person stealth game, where you're on the run from robot gentlemen.

After a successful Kickstarter and a bit of an incubation period on Steam Early Access, “Tweedpunk” stealth action game Sir/Madam, You Are Being Hunted is out in the wild. The work of  a team of people Big Robot, but perhaps overshadowed by the input of a single person, Jim Rossignol (the about page on the website does nothing to dissuade this, essentially listing the company members as “Jim Rossignol and some other people”).

Jim Rossignol is probably best known for being a game critic and one of the founders of gaming website Rock Paper Shotgun. That puts him, and by extension, his game, in a bit of a tricky spot. There aren’t many well-established games review outlets that don’t know Jim personally, and so are in a position to give an impartial critique of the game. Even the Rock Paper Shotgun website waived the possibility of reviewing the game, with a note that “one of the principle people behind it … is me”. Though I find Rossignol a talented and agreeable writer, I don’t know him personally. I have read his website, and his book, and that’s it. This, I feel, puts me in a good position to write about his game, except–

Except I found so many things wrong with it, it seemed like writing a review might be seen to be a deliberately contrarian act. Sir, You Are Being Hunted, with its favourable reviews across the board and general popularity, just might not be my sort of game. The visuals are stunning at a distance, the environments completely evocative of the English countryside, with general gloom and mist and the occasional building, flora and fauna perfectly realised given its low-budget look overall. But I found the gameplay rather intolerable after a point, as you’re scouring the world for runestones and other collectibles, whilst avoiding detection by robot hunters, and that’s the entire game in one sentence.

So I’ve tried to come up with a way to be as objective as possible about the game. And that starts off easy– the Mac version in particular lacks a level of attention, with shadows that don’t render correctly, objects rendering closer in your peripheral vision, a loading screen that initially hangs until you click the mouse to wake it up, as well as other graphical issues, but then I struck gold. What better place to get a yardstick of a game’s design, than Rock Paper Shotgun itself.

I don’t mean the endlessly sycophantic comments that praise the game and its creator in the website’s comments section, but a running feature on games design, “Rules for Games“, no less than seven posts on “do’s and don’ts” for developers. It seems to me that a good way to measure the success of the game’s design is to hold it up against these rules. So below, that’s what I’ll do, omitting the ones that aren’t applicable, and adding some less objective commentary were necessary.

Do: let me flush the toilets and turn on the taps

Failed. There are no toilets and taps as far as I can tell, but everything in the game that you can interact with, from corpses to buildings, are “interactive” in as much as your cursor turns to a hand icon, and pressing E opens an inventory. Much of the contents of said inventory is literally junk, and it’s junk that doesn’t even provide much in the way of flavour. There’s only so many times you can be impressed by finding a small pile of bones somewhere.

Don’t: tell me that you’re a game any more.

Passed. The game takes itself seriously, which is quite a feat given the combination of hunter-killer robots and afternoon tea.

Do: feel free to let me quick save.

Failed. You can only save at certain locations, and even then, not when you’re under threat. Dying means a reload, making it rather punishing.

Don’t: show me an unskippable animation when I die.

Passed. You can get right back into the action, from however many minutes ago you last saved, with a bit of a delay thanks to the longish loading times.

Do: let me carry more than two guns.

Passed. Although constrained by inventory space, you can have up to 10 items (including weapons) bound to the number keys.

Do: feel free to hire a writer to work for your team from the start of development.

Don’t: have flying baddies in your game.

Failed. Some of the enemies that come looking for you are airborne, although they don’t attack you directly.

Do: agree to an industry wide standard on the location of save games.

Failed. Save game files are stored in the application bundle, which is probably the worst place to put them on a Mac.

Don’t: stop me from sprinting after three seconds.

Passed. But on the other hand, sprinting is only marginally faster than not sprinting in the game.

DO: let me choose my game settings from outside the game.

Failed. But on the other hand, this is probably the rule that I find to be the most superfluous.

DON’T: launch your game with an unskippable cutscene.

Passed. There are no cutscenes to speak of.

DO: have your in-game volume sliders work.

Passed. Although the audio assets are of variable quality (the music is consistently good), there are separate sliders for different parts of the audio, so you can do things like mute everything except the robots, or make the announcer (who provides audible hints) louder or quieter.

DON’T: make it difficult for me to quit.

DO: let me have as many save slots as I want.

Failed. There are only five slots to save worlds you’ve generated, and then you only get a single save in each world.

Passed. You can avoid fights altogether, and even if you don’t, everything goes down with a single hit.

DO: bring back maps on TAB.

Failed. The in-game map is bound to the “M” key, although all keys are rebindable. The map itself is actually rather good, as you can add your own markers and notes that will show in the HUD. You just have to find the map for each island first.

DON’T show hints on loading screens that I absolutely couldn’t have been playing this far without knowing.

Passed. The loading screen hints are in the form of a survival guide, which actually do give you useful advice. Indeed, I would have liked to be able to view them all at any time from within the game, rather than had to wait for the loading screen lottery to tell me about them.

DO feel free to notice that mice changed in the last decade.

Passed. You can bind functions to any extra mouse buttons available, although you can only have a function mapped to either a single key or a mouse button.

For those of you not keeping score, that’s a 61% pass rate. So is the game worth a look? Well I suppose that depends on what you want out of your games. If you want a pleasant world to explore, SYABH will definitely give you that. If, like me, you want a little more out of your game than opening containers, running about, and occasionally shooting at something, then maybe give it a miss. If, on the other hand, you felt that Deus Ex: Human Revolution was positively ruined by all the cutscenes, storyline, character progression and indoor areas, then this might just be your ideal game.