Having moved, I found myself without internet access for over a week*. So of course, this proved to be one of the biggest for Mac releases, with Hitman: Absolution, Van Helsing II (scheduled, but apparently the Mac version is now delayed), and without any warning, Modern Warfare 2 and 3. Oh yeah, and there was also a special event in Diablo III, where you could spend a whole week stockpiling legendary items (doubly annoying because Diablo III was a game that I actually felt like playing, for the first time since reviewing Reaper of Souls). So I missed all of that. I was actually going to try tethering my mobile to my Mac Pro to see how Diablo III performed under such conditions, but apparently I blew my entire month’s tethering credit in a single night just by giving the family laptops and iPads access to it. Word to the wise: this is when automatic updates and cloud backups are definitely NOT a good idea.

One good decision I did make was to put Steam into offline mode before getting disconnected. It’s a bit of a weird experience booting up Steam in offline mode; it just looks like a ghost town with no friends online (even for a miserly git like myself) and no store front peddling shovelware at you. Still the games work (except the multiplayer ones, of course), so I thought maybe I’d finally get round to the second episode of The Wolf Among Us, or maybe the more recent, third episode of The Walking Dead Season 2, but then I remembered that part of the fun of those games is comparing your choices to everyone else’s, a feature that won’t work offline.

Given that two Modern Warfare games had just dropped, and for some reason I hadn’t quite completed the first (Call of Duty 4), it seemed like a good starting point. Except for this:

To Steam’s credit, many other games I tried out in offline mode did seem to work (though the client itself was a bit flaky in Big Picture mode; though of course, it could have been due an update), but I couldn’t shake the feeling that I was having a much lonelier experience somehow (as Steam puts it, “Friends is not available in offline mode”), despite the fact I spend the vast majority of my time playing single-player games. As such, it became rather difficult to find a game I wanted to play for the sake of playing (and to relieve the general stress of moving).

So it was that I turned to my Gog.com collection instead, wherein lay a number of games that had no knowledge of the outside world in any form. Gog doesn’t have an offline mode, you just have to make sure you’ve actually downloaded the game you want to play before going offline first. Fortunately I make a habit of doing this whenever I get something from Gog, even if I know I probably won’t be playing it any time soon, so I figured the time was right to load up Icewind Dale, a game that I don’t think I ever played to completion.

And then this happened:

I had no choice but to press cancel, which then made this happen: 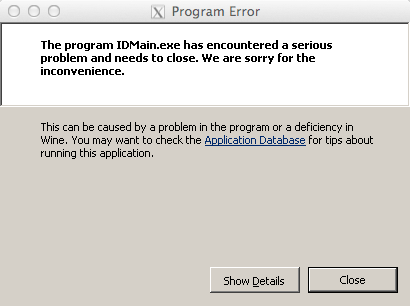 I thought that perhaps I could move on to Icewind Dale 2, but I was dissuaded by the possibility that I’d be missing some important plot points, or that, having played ID2, there’d be no point going back to play the original. Without a Google/DuckDuckGo to hand, I couldn’t do the proper research.

So I had another look through my collection, this time turning to Mac App Store games (which are all blissfully unaware of the existence of the Internet, and all seemed to run without complaint). The first port of call was to finally tackle Star Wars: Empire At War, a highly-praised strategy set in the pre/post-Jar-Jar Binks universe. It ran perfectly well, I played through the first (of 7) tutorials, but that proved to be too much for my weary brain. This was the point where ordinarily I’d load up a YouTube video of a Let’s Play to get the gist of it, but of course that wasn’t an option.

I returned to the collection, at which point Violett caught my eye. It’s a point-and-click adventure, another one of those games that no-one really bothered to review, despite it getting a fair bit of the spotlight on various store pages when it was released, and seeming to have good production values. I fired it up, and to my chagrin, I realised it had taken me until this point to realise I’d plugged my desktop speakers into the microphone socket of my Mac Pro (professional tip: if you own a Mac Pro circa 2010, keep the box it came in if you ever intend to move it anywhere). OS X is really quiet when you don’t have Skype, Messages, or Mail running, at least that’s my excuse.

Playing a more traditional point-and-click adventure game is actually a great thing to do when the web’s out, as there’s no temptation to look up solutions in a walkthrough, but then on the other hand, if you get stuck there’s not much you can do about it. Despite the game’s built-in help system, I got stuck on the very first screen (where you have to move a paperclip around), and decided to call it a day.

* Hence no reviews or journals on the site for a while, because for some reason I didn’t plan ahead and schedule one for last week like I normally would.