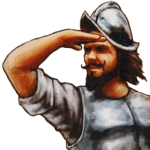 A strong strategy game combines with a strong role-playing game to produce something unique and fun to explore.

A new game has been sighted and will be conquering Macs on May 30th. Dubbed Expeditions: Conquistador, it’s rather cleverly phrased as “a tactical roleplaying game with a touch of strategic resource management and a pinch of choose-your-own-adventure” by the people at Logic Artists, this being their first game on the back of a successful Kickstarter campaign last year.

You will take on the role of a Spanish Conquistador in South America around 1520. Select the members of your expedition and explore campaign maps based on the actual topological maps of Hispaniola and Mexico. Through intricately branching dialogue, you will engage with the characters and situations that you encounter across these uncharted areas, and when it’s time to spill blood, a tactical combat system of great depth and brutality will let you control your individual troops in battle.

The game will be €19.99, available via Steam and Gog, and there’s even a trailer below.