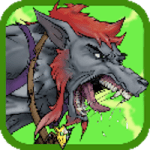 Some puzzles make you want to think, analyse, consider. Some puzzles want to make you smash stuff. With MacGuffin's Curse, you get to do both.

Released simultaneously on Windows, Mac and iOS, MacGuffin’s curse is one of those rare puzzle games that is both accessible and entertaining. The story sees the titular MacGuffin infected by lycanthropy when a heist goes wrong. He’s able to switch between his regular and werewolf forms when stood in a patch of moonlight though, and makes use of each in order to navigate the many puzzle maps.

You control MacGuffin by moving him in cardinal directions, and typically your objective on each map will be simply to go through a door to another room. However, often the door will need to be powered up, and any obstacles will need to be removed. In huma form, MacGuffin can operate terminals, pick locks, swim and climb through windows. In werewolf form, MacGuffin can smash, shove and generally cause chaos. Switching between the two forms becomes a key element in solving the many puzzles throughout the game.

Interestingly, the puzzles are broken up by some RPG elements. For example you’ll be given several quests throughout the game which can be completed at your leisure, and you’ll also have to make your way through multiple dialog trees. This suffers a little from the lacklustre writing, but it does make the game as a whole more interesting, and the entire thing is infused with some mild comedy.

The pacing is excellent, with the game doling out new twists at a steady rate, the non-puzzle segments ensuring that you don’t get bored, and the optional “quests” allowing you to play at your own pace. The Sokoban-style puzzles themselves aren’t particularly taxing to begin with, but later there’ll be multiple considerations and less room for error. That said, it never reaches the level of something like English Country Tune, perhaps because the puzzles are so utterly intuitive (and there’s a built-in help system if you do get stuck). There’s a few things to unlock as you play through, and the sheer number of optional puzzles gives it a fair bit of longevity.

Had the puzzles MacGuffin’s Curse not been particularly interesting, all the additional layers would be enough to hold your interest. Fortunately, you’ve got a solid set of puzzles to figure out, and everything else is just gravy. It’s probably not a game to play in one long sitting, but it’s definitely something to have at hand for when there’s a full moon out.

The game won’t tax even the most modest of system, but the art style is delightful and there’s a jaunty soundtrack accompanying it. Considering how simple it is, it’s quite a good-looking game, all told.