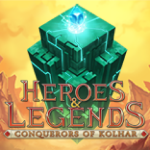 A strategy RPG, where you complete a series of battles with a party of heroes, gaining new abilities and items as you go.

Heroes & Legends: Conquerors of Kolhar is a very simple game. I’m completely fine with that. Sometimes you just want a bit of mindless fun, a bit of click-click-clicking to pass an hour or two. Heroes & Legends: Conquerors of Kolhar could certainly be that game. You take control of three typical fantasy heroes, and send them off to defeat wave after wave of fantasy evil-doers in fast, decision-driven battles, collecting ever-more powerful items, leveling up, and learning ever-more powerful skills. To mix things up a bit, there’s a map where you can pick from different battles, and there’s also a crafting system, where you can salvage items for resources that can be used to create yet more items to help you turn the tide of battle. To top it all off, Heroes & Legends has a bright, cartoony visual style and as a result, is very pleasant to look at.

Sounds promising right? It certainly struck a chord with me, looking like something that could be a great deal of fun. A very simple concept, and yet I tried to think of something similar and came up blank, so it’s probably somewhat original too (while none of the individual gameplay components are going to win any awards for innovation, the way they’re all packaged together is certainly interesting). And then from this foundation of a good combination of good ideas, the game takes a nose-dive into blandness, mediocrity and obscurity. 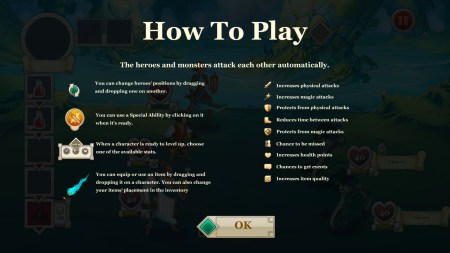 This screen represents the sum total of information the game gives you on how to play it (accessible from the pause menu during a battle). That’s fine though, this is a simple game, you don’t need much instruction. Except for what little explanation there is actually doesn’t properly explain what you’re supposed to do. 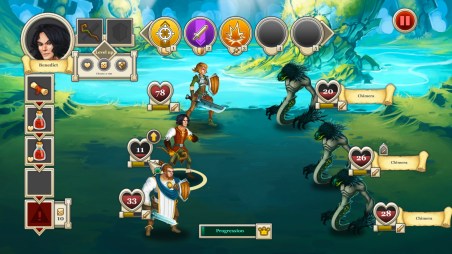 What you are supposed to do is pair up each of your combatants (on the left) with an enemy on the right. Facing opponents will trade blows with each other until one of them is dead (there are stats that control how often a character makes an attack, and then how much damage that attack will do). Once you’ve eliminated all the enemies on the right, you get a new item in your inventory, the progress bar along the bottom increases a miniscule amount, and a new wave of enemies appears. Lose all three of your heroes, and you’ll have to start the battle from the very beginning (but at least your heroes keep their levels and equipment). Once the progress bar is full (which is after 10-20 waves), you’ve won the battle. The game doesn’t tell you any of this ahead of time, you just have to figure it out on your own.

Each of your heroes has a number of skills they can use (you get to pick up to 5 from a larger pool), ranging from healing to buffing to doing extra damage, which then go on a cool-down before they can be used again. You can also swap any of your heroes at any time, so you can replace a wounded fighter with a healthier one (if there’s no enemy next to a hero, they’ll just sit there, although you can still use their activated abilities). Heroes also gain experience, and frequently they’ll gain levels, which allows you to increase one of three randomly chosen stats.

That “inventory” that’s alluded to? That’s the strip running down the left, which has items that are randomly drip-fed to you. This will mostly consist of potions and scrolls that provide instant level-ups (more on those later), but also new equipment on occasion. There doesn’t appear to be a way to access this inventory outside of battles, such as to outfit your heroes with new weapons you’ve crafted (and more on that later), so you have to do everything in battle. That exclamation mark at the bottom with a die next to it? That’s the where the item that’s about to be forever lost to you will go. You see, the inventory has space for five items, and as soon as a new item appears, the one in the red box will vanish. The only reason I know any of this, is through 70 minutes of playing and trying to figure out exactly what was going on.

I can only assume that the interface was designed specifically with an iPhone screen in mind (although no mobile version of the game has been announced), because really there’s no excuse for a mouse-driven interface so ill-suited to the tasks required of it. There’s a dire need for tooltips over various things (items and skills have tooltips, but icons and other symbols do not), there are things that look like clickable buttons that aren’t, and the little information that you might need (just how much strength does my fighter currently have?) is conspicuously absent most of the time. True to the marketing bumpf, there are plenty of different enemy types, but these are rendered meaningless by the player being unable to discern exactly what’s different about them aside from the way they look or how much health they have (many do have little icons next to them, but these are seemingly left to your imagination to interpret). There are a couple that do something interesting, like the thief who irritatingly takes your items, but these are few and far between.

But more than any of that, there are aspects to the combat’s design which result in it being incredibly easy to “game” and win without much thought or input.

If one of your heroes gets knocked out, they can be revived with a health potion. On the other hand, you can move their limp, lifeless body around, using them to simply block an enemy from doing anything. See, the enemies almost never attack anything not in their own lane, and never do anything if there’s not a character opposite them. If you put a knocked-out hero next to them, they will simply contemplate their existence until the end of time or until you move someone who’ll hit back opposite them. As soon as I realised, this, I foresaw a number of viable strategies, all of which revolved around one key element: you only need a single hero to win. It literally doesn’t matter if you have two heroes that do nothing but lie unconscious on the ground for the entire battle, as long as you have one functional hero you can shuffle around.

By taking this approach, you concern yourself with a single hero, who will receive the vast majority of the experience points, and you can earmark all the potions and scrolls for that hero. This character will then massively out-class everything the game throws at it (the rate of gaining levels through experience will gradually taper off, but scrolls are frequent enough that they can still level up every minute or so), allowing you to breeze through the levels. If you’re particularly efficient, the other chump characters can be kept alive long enough to provide an ability-powered buff or extra damage (any abilities that you use will always affect something, even if there’s no enemy directly opposite), but really you don’t need to. The only real concession to playing like this is that the cooldowns appear to be based on time spent fighting (as opposed to just time passing), but really, it seems you don’t even need to make use of abilities to win battles. This approach will work for the entire game, and indeed the only fight I lost was the final boss, and then only because she makes you attack yourself and I didn’t use a potion in time.

Even if you decide to forgo the “strategy” aspect of the game, there’s not much to recommend. The story that links together the different battles is completely throwaway, and the different battle types (plot, hunting and others) seem functionally identical. There are some “events” which you can activate, which involve choosing from two possible outcomes (both of which are either beneficial or penalise you in some way), but these grow a little tiresome after a while. There are “challenges”, but they were– yet again– another nearly endless series of fights, so I didn’t really check them out. The crafting portion of the game is perhaps the most disappointing of all though.

This is the crafting screen: 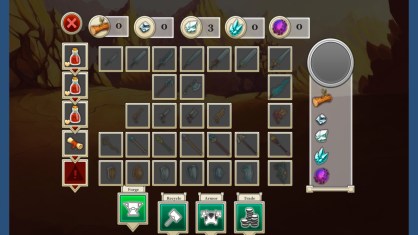 Looks straight-forward enough, but it is not explained at all in any context, it’s unclear where you’re supposed to get materials from (you can salvage any of the five items in your inventory, but so what?) and perhaps worst of all, there’s no information as to exactly what it is you’ll be crafting anyway. Presumably the right-most sword is better than the left-most sword, but by how much? Actually, worst of all is that you can’t see what items your heroes currently have before you start crafting something inferior. Actually, worst of all is that any items crafted go into that five-item inventory, only accessible in battle, and if you remember to actually equip the bloody thing before it’s summarily replaced by another health potion.

On the bright side, I guess there’s nothing here that couldn’t be remedied via some interface tweaks, rebalancing and maybe a little bit more thought on how everything goes together– nothing, in other words, that couldn’t be addressed by a patch or two. As it stands now though, I’m left with the impression of a slightly more interactive version of Progress Quest, one which I slogged through for six hours of monotonous battles just to be done with it.

I certainly can’t fault the game for performance or for seeming unfinished or buggy (aside from the sheer lack of tutorial). I did experience issues with the Mac version, but these were solved by disabling the Steam overlay. The visuals are nice (although the animation is extremely rudimentary), and whilst the sound effects didn’t leave any lasting impression, the music was certainly quite good.