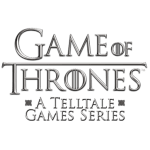 Game of Thrones, in my opinion, is the weakest entry to the Telltale Games series’ thus far. It’s not terrible by any stretch, but it has a number of problems which I’ll get to in a minute. Before that, I need to apply the usual disclaimer: this is all based on the first episode of a proposed 5-episode run, so anything can happen in the next four episodes.

You have probably heard of the TV series based on the A Song of Ice and Fire book series by George RR Martin. High fantasy meets political intrigue, or to paraphrase South Park: “lots of wieners and not enough dragons”. It’s a very mature take on a familiar genre, and the result (at least in terms of HBO’s series) is utterly compelling. It’s all about the strong cast of characters, as most good drama is, and it’s perhaps this which gives Telltale the perfect vehicle to take us on its now familiar journey- where you make choices through dialogue, and those choices then affect things that happen later in the game.

The story here takes place in parallel with the events at the end of the third book/series of the television show. Fans of Game of Thrones will be pleased to know that many of the series’ cast have come to reprise their roles here, but as great as that is (the voice acting is to a high standard throughout, whether the voices are familiar or not), I wonder if the decision to include them is the primary reason the game didn’t gel with me.

The scene with Cersei, for instance is tense, but this is thanks to the work the TV show has done already. We know how deadly she can be, whereas here the game does nothing to reinforce that. Similarly Tyrion can be trusted. How do we know that? Because we’ve seen many, many episodes showing his perspective on the goings on of King’s Landing to form that opinion, whereby in the Telltale Game he just flips between mocking your character and general disinterest of the whole situation. Then somehow you’re best friends and telling him all your secrets. Which is fine, we know he’s to be trusted. Because we’ve seen the TV series.

This is in sharp contrast with a scene with Lord Ramsay later on, which is able to stand on its own (that entire scene in fact, was the high point of the episode, and gives me hope that the rest of the series might actually improve), and is probably as tense an experience whether you’re familiar with the characters or not.

Even that aside, the signature choices you need to make become a little less meaningful as the lead characters tell you what to do. The first instance of such a situation works, where there are two characters telling you to take opposite approaches to a situation, but just before another one later on you’re basically told, “this is how you should play it”. You can still do it however you want of course, but there’s no incentive to ignore this advice unless you’re just feeling spiteful.

But even this leads to yet another issue- there seems to be a big disconnect between what you are trying to do and how the game reacts to it. One character advises you to avoid arousing Cersei’s suspicion in any way, then when you do that, she goes and gets upset at your apparent disloyalty. When faced with other “big” choices (i.e. the ones you get recapped at the end), some of them seem rather inconsequential at the time. The whole episode is a little like that, and as such my choices never felt as personal as they have in other Telltale games.

It probably doesn’t help that you switch between several characters during the course of the episode. Whereas Tales from the Borderlands comfortably spun two interweaving points of view, Thrones puts you in the shoes of three different characters, which made for a more frustrating time. Just as I was understanding the personality and motivations of my character, I’d be thrust into a new situation with a new character whose wants and needs had only been previously alluded to in a backhand way if I’d been playing close attention. Without delay, I was asked to make choices on behalf of someone I didn’t know at all. Needless to say, this did not give those decisions much weight.

Though I can’t fault the writing, particularly as it does well to capture the voice of the source material, I couldn’t help but think that everything felt recycled; all the individual lines had come out of some sort of Game of Thrones Dialogue Generator (I just Googled and was a little disappointed to see this wasn’t an actual thing), which is perhaps to be expected. It’s the first Telltale Game that hasn’t made the source material its own, which is especially disappointing after having come from the high point of Tales from the Borderlands.

And therein lies the problem: The Walking Dead couldn’t care less if you’ve read the books or seen the TV show, the game simply plucked the setting and overarching themes and built as something new. Likewise The Wolf Among Us, where I would guess most of the players were familiar with the fairy tales, but not the Fables series. In Game of Thrones the TV Show, it’s all about the characters, and the world-changing events they find themselves in, but in Game of Thrones – A Telltale Games Series, everything seems to take a back seat to those world-changing events. There’s only one iron throne after all, and that story’s already been told.

This time around, Telltale have abandoned their usual cel-shaded style and gone for something more video-game-looking, although the backgrounds and scenery certainly have a nice painterly look to them. The performance is adequate, perhaps not as good as with Tales from the Borderlands, but certainly not as bad as The Wolf Among Us (I was unable to record gameplay footage due to audio issues when doing so). Some graphical glitches are to be expected.