A steampunk city-builder where colonists lead a life of their own amidst burgeoning industry, mad science, and Victorian-era horrors.

This is very cool: Gaslamp Games, creators of the inimitable  Dungeons of Dredmor, have announced their next game, Clockwork Empires.

The announcement is written in their trademark wacky style, and gives us a glimpse into a steampunk-themed world, even borrowing some of the more obscure elements from Dredmor, such as moon-fungus and mad science. There’s a long list of features, but it’s a bit light on actual details of gameplay, beyond the ability to create a colony using “procedural extrusion” technology.

However, an article over at PC Gamer sheds some more light on the subject. It sounds like where Dungeons of Dredmor was based on a desire to make roguelike games more accessible, better-looking and humorous, Clockwork Empires is aiming to do the same for the (notoriously user-unfriendly) ASCII civilisation simulator, Dwarf Fortress (as an aside, I’ve been meaning to add a page here on Dwarf Fortress but have struggled to put in the necessary hours to evaluate it properly).

Clearly this will be a monumental task. Dwarf Fortress is praised for its ability to simulate some really obscure details (such as depression), giving rise to the “emergent storytelling” people love so much. Finding the balance between having enough details being simulated, versus making the game easy enough to understand will be crucial, but given that Gaslamp successfully pulled this off before with the (similarly inaccessible) roguelike genre, they’re probably as qualified as anybody to make it work.

Of particular note is the aforementioned procedural extrusion system. From the PC Gamer article:

“You specify a floor plan, and you specify some vague stylistic goals, like what you would want, say, the profile of the walls to look like. Are you a guy who likes flat walls, or gabled roofs, or non-gabled roofs? It extrudes that for you and you get a building. It’s not just restricted to square buildings. You can have fairly complicated structures, you can build palaces, or large depressing mega-factories, or tiny shanties or whatever. And the game just extrudes it for you.”

So a steampunk Dwarf Fortress, fully realised in 3D, with a stylised setting and a sense of humour. Can’t wait. 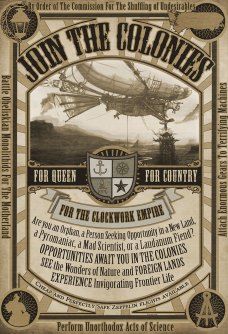