Polished, engaging gameplay and a stellar port make Borderlands 2 one of the best games available on the Mac today.

It also seems like the new update also adds a launcher app that looks ready for Aspyr to upsell straight into your eyeballs. A pity that it offers links to buy stuff you’ve already bought. 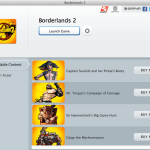 What else can I add to this? Hmm, how about a shift code for 5 golden keys: