It’s a little known fact that many Mac games will work with the Xbox 360 controller (both wired and wireless) with a minimum amount of fuss. Some games are just more comfortable to play with a controller (this is especially true when using a MacBook), and Microsoft’s controllers are among the best.

Note: There are two different methods for using a controller with Mac games; certain games have controller support built-in and will conflict with the method below. We present the following method because it works with the majority of games and is the only way to use a wireless controller. For more details, see this article at Aspyr’s knowledge base.

Connect the wired controller (or wireless receiver) to any USB port on your Mac and install the driver. It can be configured in System Preferences. 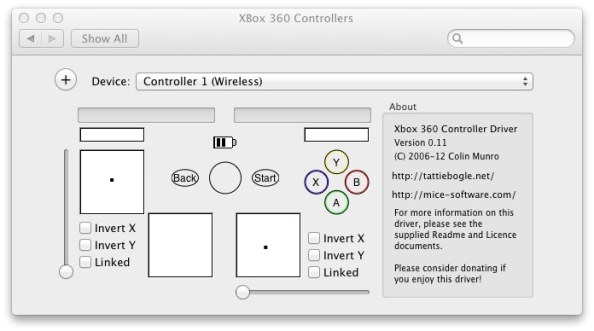 Make sure the controller can be seen in this panel, and then launch the game!

Finally, if you find the driver useful, consider dropping Tattiebogle a donation for his great work.

Where can I get said wireless receiver?

Links should be fixed now.