The file size of the game is really small, at 250 MB give or take. In the short time it’s taking to download, I’ve registered on the official forum and subscribed to the official RSS feed (along with 23 others, according to Google Reader) so I can keep up-to-date with developments. I Haven’t read any of the previous posts yet.

Prior to starting the game, these are the things I know:

Currently the multiplayer portion of the game is in beta, with the single-player campaigns to follow later. Though the game will be free-to-play on launch, you can secure yourself a place in the beta now for $5.

After the game starts, you see the screen above. Some sections can be highlighted with the mouse, but there’s nothing to tell you what’s what. I have a natural aversion to clicking help buttons, so it’s a while before I do, but thankfully this provides a minimalist overlay, rather than lots of information: 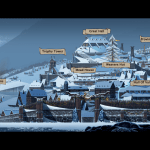 To my dismay, some of the buttons do not seem to have been implemented so far*, with the others taking me to new screens. Each of these looks great, but I have no idea of the purpose of much of it (yet). 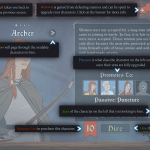 The “Mead House” seems to be where I can “hire” characters. There’s a help button here which doesn’t work*. There are four such character types available: archer, axeman, warrior and shieldbanger. Each of those has the ability to be “promoted” to (presumably) one of three sub-classes (thus giving 12 possible classes). There’s also a fourth sub-class with a question mark for each. Yeah I don’t know either. So I’m wondering then if there’s permadeath in the game. Needing to “hire” characters seems to suggest that I will have to keep restocking them, or that they are otherwise only temporary members of your team. I leave this screen for the time being and move on to the “Proving Grounds”. 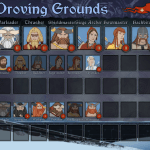 Here there’s a row of characters with enigmatic names, such as “Thrasher” and “Backbiter”. There’s also a help button flashing at me, as well as something labelled “Click!”. I do so and am taken to another screen with a grumpy-looking “Axemaster” and another demand to click. 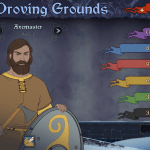 An information box about something called “Stonewall” pops up, but I dismiss it. It’s too soon to start reading up on skills right now. Nothing seems to happen after that, so I click on the flashing help symbol. 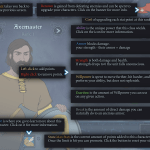 Again this does a surprisingly good job of explaining things in a concise way, but much of it is information I’m just not ready for yet. I do, however, learn that the number in the flag at the top of the screen is a currency system (called “Renown”, of which I start with 1000) that I can click for more information, except that I can’t*, and that my team has a “power” rating (currently at 66). 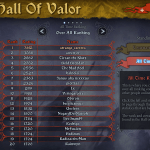 The “Hall of Valor” is something that I can immediately identify with. It’s the leaderboard, see. Rank #1 is currently held by “strange_carrots”. So that’s what I’m aiming for in this series. To get to the top of the list and proclaim myself master of the game, I will have to beat strange_carrots, who has a rating of 3612. My rating is presumably 0, although I haven’t come across this information anywhere.

As an aside, I’ve found that the application behaves itself very well. There hasn’t been any crashing or other weirdness is my (admittedly brief) time with the game. It plays nicely with exposé, with the only problem I’ve noticed being that the Steam overlay doesn’t work*. 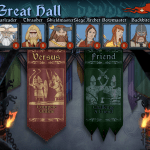 Finally then to the “Great Hall”. Here I can actually play a match. Seemingly with no other choice but to dive straight in (there’s no tutorial as far as I can tell*), I click the banner labelled “complete online”. To battle! 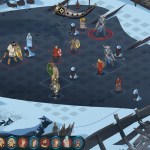 It takes approximately 5 seconds to pair me up with someone, but I immediately regret not having carried out the most basic research on the gameplay before starting the match. The game asks me to indicate that I’m ready, but I can’t see if there’s actually anything I can do (such as set initial positions) before clicking to signify that I am. There’s a short burst of rousing music (which is a welcome break from the previous soundtrack of odd grunts and other noises), and the game has started. I’m not sure what to do, and I don’t want to back out now and leave my opponent GlobalRuss disappointed. 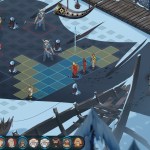 For the most part, the interface is intuitive. Sadly there are no tooltips over the buttons to tell me what they do*, but it boils down to moving, attacking, and using abilities. When you click on an ability, there is a popup that tells you what they ability does, but to be honest, there’s little time to read it, so it is clearly intended as a reminder rather than a tutorial. There do seem to be more clicks than are strictly necessary (it seems you have to confirm everything), and I’m faced with the inexperience of not knowing exactly how far I need to position each character for it to be able to attack. Speaking of positioning, there are blue movement squares as well as brown ones. I don’t know the difference, except that brown ones are further out. I opt to use those all the time. I also have no idea how many times an ability can be used, so I just use them wherever possible.

When GlobalRuss takes his turn, I see little icons popping up all over the place, which I take to mean are passive effects getting triggered. I have no idea what passive abilities each of my characters have, and there doesn’t seem to be a way to find out mid-game. Instead, I’ll be relying on dumb luck. Whilst GlobalRuss plans each move, I explore the interface. I gradually discover that the right mouse button can be used to pan the view (mousing to the edge doesn’t work, at least on my dual-monitor setup), and that characters can be clicked to display some stats. There are 3 such stats, which I dub “shield”, “fist” and “star”. 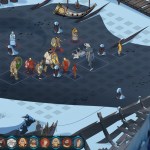 First blood! Unfortunately, the victim is one of mine, one of the two giant dudes. This does not bode well. I also note that my opponent’s team is made up of the same character types as mine, so it’s essentially a level playing field. It’s not long before I rack up a kill of my own though, and gain one renown point as a reward. There are still a lot of things I don’t understand. When you perform a straight attack, you can target either shield or fist, and then add one or more stars. I’ve really no idea as to how each of these plays a role, so I stuck to targeting the lower value first and then adding some stars in a whimsical manner. 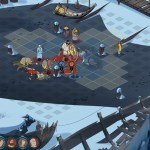 All of a sudden my team is whittled down to two. At this point I notice that the horn at the top can actually be clicked, but I have no idea what the effect of doing so is, other than to make stuff on the screen flash. I manage to make a couple of quick, desperate kills, closing the gap to 3:2 but it’s quickly game over for me. I am defeated, the top slot on the leaderboard looking ever more distant.

Time to go read up on some of this stuff, I suppose.

* The Banner Saga is currently in open beta. Any faults or issues mentioned in this article are not intended as a criticism of the state of the game.