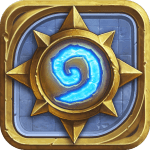 I’m dedicating time to one game in order to try and master it. I’ve chosen HearthStone: Heroes of Warcraft to be that “One Game”. Each week I’ll be reporting on my progress within the game, as well as things I’ve learned outside of it. You can follow my progress via this tag.

Something interesting about HearthStone (at least, in its current form): you can’t play “arena” until you unlock every hero, of which there are currently 9. As I write this, I’ve unlocked two, representing the sum total of my experience with the game thus far: completing the tutorial, and then defeating the Hunter AI.

Those stats I mentioned at the top– Play Mode Wins and Beat Arena Key? I have absolutely no idea what they mean. Such is the absoluteness of my ignorance. In fact, I also don’t know how many cards I’ve unlocked, or what the levels mean (or if they even mean anything). But at least I know where to start.

I’ve played exclusively as a Mage hero type thus far, which was a fair few weeks ago, and having unlocked the Hunter and essentially starting afresh now, I’m going to switch to that character next, and attempt to unlock the next hero. Then I’ll probably switch to that hero and tackle another one. Hopefully along the way the game will make more sense, and some initial possibilities for strategy will reveal themselves.

So far, I don’t remember the game being particularly challenging, at least against the AI, but maybe that’s the point. I’ll unlock the remaining heroes in “practice” mode, and then see about playing against some humans.

But before all of that, you might be wondering, what is HearthStone?

HearthStone is a Collectible Card Game (CCG). Technically it’s also a Trading Card Game (TCG), so I’ll probably use the terms interchangeably throughout this series. As with other games in the genre, it’s turn-based. You draw cards from a deck you’ve previously designed and play them on your turn.

The rules are as follows:

That’s everything, although the beauty of CCGs is that pretty much every rule can be subverted in some way by specific cards. Some Minions have a “Charge” ability for example, that allows them to attack as soon as they enter the battlefield, whilst those with the “Taunt” ability must be targeted first.

There are also a bunch of rules that concern how you can build a deck, but I’ll get to that at a later date.

Right off the bat, the interesting thing about the Warrior is its special ability: it gives itself two points of armour (at a cost of two Crystals). Until now, I wasn’t even aware there was an armour stat, maybe it’s something that’s been added only recently, but whatever the case, the game doesn’t explain what it does (it appears that it’s an additional source of health).

As a Hunter, you get the ability to deal 2 damage to the opposing hero at a cost of two Crystals. Most of the Hunter’s deck consists of “Beast” type Minions, as well as cards that deal direct damage and those that increase the attack of other Minions.

For the actual battle, I employed a very simple strategy, simply trying to build up as large a force as possible, and overwhelm my opponent with numbers (the Hunter’s deck has a number of cards that buff each other’s attack, and so I focussed on attacking the Warrior directly, due to having high damage, low health Minions that would be wasted by attacking low damage, low health opposing Minions).

Once I’d whittled him down a bit, he played Gurubashi Berserker, a card that had high health, and whose attack increased each time it took damage. This was a considerable threat, as it meant he could use it to both remove my Minions from play whilst also increasing the damage it could later do to my hero, so killing it within a single turn became a priority. Fortunately, the combination of direct damage cards as well as my Hunter’s ability made this less of a problem, so I left him alone for one turn, assuming he would take down one of my Minions, which would reduce his health slightly but not (yet) give him an attack advantage.

Well, that was the plan. Sadly he played a “Lord of the Arena” Minion, a high attack, high health card with Taunt (must be attacked first) which scuppered my plan a little bit. At that point it was time to break out the “Tracking” card I’d been holding onto, which let me look at the top three cards and choose one to keep. This gave me a choice of a powerful Core Hound (this was drawn twice), which I wouldn’t be able to play until the next turn, or Arcane Shot, which would do two points of damage. Not enough to kill the kill the Berserker outright (which was at 4 health at this point), but a card that would certainly give me more options, and was the one I went for.

With 5 crystals available (I also still had The Coin if needed), I decided to take down the Lord of the Arena. 2 damage from Arcane Shot, 1 damage from summoning and Ironforge Rifleman, brought him down to 2, then I used my last Crystal to summon a second Stonetusk Boar (with Charge), and then sacrificed both Boars for the killing blow. I still had an Oasis Snapjaw able to attack, but with the Lord of the Arena out of the game, I could target the Warrior for 2 damage.

By my next turn, another Lord of the Arena had been summoned, the Berserker was up to 8 attack, and all I had left was the Rifleman. I was also now at the point where I had more Crystals (7) than I could spend. I used my Hunter’s ability for 2 damage to the Warrior, then played my only Minion, a Razorfen Hunter that also summoned a Boar when played. I passed without attack the Lord of the Arena, which would merely have wiped out one of my few Minions. At this point, it was a war of attrition. In four turns, I could remove the last 8 points of his hero’s health just using my Hunter’s ability.

That’s if I could hold out that long. And forgetting of course, about his armour ability, which meant he could gain an extra layer of health as quickly as I could remove it. Down to 20 health, I wondered if I could win after all.

And then it was over in a single turn. He reduced me down to 6, and then played a card that gave his hero the ability to attack, which he promptly did. Game over for me. Time to try again.

What could I have done differently? Well perhaps I should have waited a bit longer to use the Minions that provide a buff– focused on getting more numbers onto the battlefield first. Then there’s the retrospectively dubious choice of taking the low value Arcane Shot over the Core Hound, which would have made better use of my Crystal stockpile. Of course, there’s an element of experience here too– now that I know the sort of cards I’ll be up against, I can plan more accordingly.