I finally got one of my Diablo 3 characters to level 60 this week, which means I can resume normal life again, at least until the expansion comes out and drags me back in– oh, that’s only a couple of days away. All told, I clocked up just over 46 hours on my Barbarian to get him to level 60 (actually, level 60 Paragon 3), but I suspect around 30 hours of that was pre-patch 2.0, at which point he was at level 30-odd, having completed the campaign once on normal, and then act 1 on Nightmare difficulty (with the Monster Power cranked up a little), just before that system was completely scrapped.

So it has been much quicker to level up characters since the patch came out, and whilst the 50% xp boost Blizzard have been running certainly played a part, being able to choose the difficulty setting certainly sped things up. I played on Hard, which provided enough of a challenge whilst being rather forgiving. One thing I noticed was that the faster levelling, coupled with the new difficulty scaling, meant that levelling up started to get pretty painful when approaching level 60. Each time I reached a new level, my equipment, which was just about serving me well enough, was suddenly redundant. The start of each level was therefore tough until I’d acquired new gear to help deal with it. This meant that I was in the odd predicament of having legendary equipment (all told, I’d amassed 12 legendary items by the end, all of them since 2.0, including the guaranteed legendary for completing the campaign at level 60) that was actually vastly inferior to rare items that were dropping later on. This is a similar situation faced in Borderlands 2, whereby blue items are only good for four levels.

This in turn meant that trying to optimise gear became a bit pointless. In particular, I found that socketing gems was a massive waste of gold. Any equipment I had with gems would need to have the gems removed, and I was roughly spending gold to remove gems in line with what I was looting. By level 60 I’d amassed about a quarter of a million (I’d probably spent the same again in gem removal costs) and I’d financed both artisans to level 10.

At this point, I’d want to continue playing, get more sweet loot, up the difficulty and start doing some of that endgame stuff. But really there’s not much point. Reaper of Souls raises the level cap by another 10, meaning I’d be in the same situation where all that level 60 gear will soon be redundant. So anyway, what this all amounts to is that I’ve returned to check out some Mac games that aren’t Diablo 3.

There haven’t been any recent, notable releases for a while, so I did what any Mac gamer would do: checked out the “Editor’s Choice” recommendation on the Mac App Store (it’s also listed under “Best New Games” and has 0 ratings at the time of writing, but bear in mind that this is a store that lists Machinarium as a hardcore game). That game was Shadow Blade.

Shadow Blade describes itself as a “fast paced action platformer game”, which is a genre that I have very little interest in, and in any case would only make me feel bad for not having completed Mark of the Ninja yet. Also it’s a port of a mobile game. But I felt like I needed to remind myself why I should never buy iOS ports on the Mac App Store. So I bought the bloody thing.

The game is Unity-based, so in theory you can rebind the keys through the game launcher, but I should point out that firstly, the Xbox 360 controller I had connected didn’t work in the game, and secondly, the default keys have been defined by a maniac. A and D move left and right as you’d expect, but then Z jumps, and X attacks, and then there’s left shift to do an air-dash. Just try that out on your keyboard now. So I came out of the game to configure the keys via the launcher, and you know what? Here, look at this: 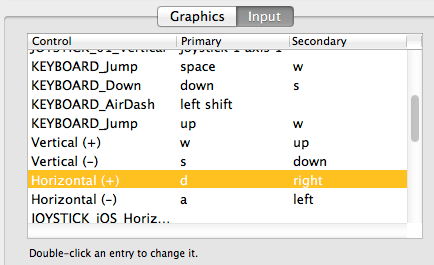 “Jump” is defined as “JOYSTICK_01_Jump”, “JOYSTICK_01_Vertical”, “KEYBOARD_Jump” (listed twice), “Vertical (+)”, “JOYSTICK_iOS_01_Jump”, “JOYSTICK_iOS_01_Vertical”. This is the case for each of the game’s four controls. You have to set them all or the game gets confused. I don’t have the patience for this crap any more. Which is a pity because actually the actual platforming had a good feel to it (if you watch the video below, my seeming inability to do simple wall jumps was a direct result of the shoddy key-mapping. Well, partially that).

So instead I played Dracula 4 – The Shadow of the Dragon. It’s one of those odd games that doesn’t seem to exist anywhere outside of the Mac App Store or Gog, but MacGameStore featured it on their home page a while back. I’ve not played any of the previous games but that doesn’t seem to matter. Dracula 4 is an old-fashioned point-and-click adventure game that has had enough of a budget to warrant rendered cutscenes, but not enough to warrant decent voice acting or even lip-syncing. All the dialog in the game is fully voiced, but by people who sound like they’ve just been woken up, spoken by characters that rhythmically flap their mouths open and closed. That said, there’s enough to sink your teeth into (sorry), as even the extremely uninformative tutorial throws a number of interesting gameplay mechanics at you, including twiddling buttons to restore an audio recording, and one of the inventory tabs is your own personal pharmacy. If you’re a lover of point-and-click adventures and/or have no interest in more demanding games, maybe this is the game for you. Or maybe just watch a movie or read a book.

Civilization V, a game that I still don’t fully understand how to play properly (and as such will no doubt be the subject of this column at some point in the future), now uses OpenCL (better performance) and supports 4k displays (and to celebrate this, it’s 50% off at GameAgent). For the record, that’s four times the amount of pixels found in your average digital cinema, and it may well be the first game to (deliberately) support such a high resolution.

Currently there aren’t any Apple-approved 4k displays (yet) that I’m aware of, but one of the big selling points of the most recent Mac Pros is that they’d be able to support such high resolutions. But clearly that’s going to be a thing soon, although I remain unconvinced in the current generation of Mac Pros as a gaming platform (I personally prefer to hold on to my old but reliable and upgradeable 2010 edition), and indeed Apple don’t even want you to put gamer-friendly Windows 7 on them.

Being as I have an Apple developer account, I’ve noticed that there are now options for retina display in the 10.9.3 beta on my Mac Pro, which is odd because I have a decidedly non-retina (regular old 1920×1080) display connected. I also have a second monitor connected, which the OS refuses to acknowledge since the beta wormed its way onto my hard disk, which means I’m currently relegated to a single screen like a non-geek. Apple advertise the Mac developer program at $99/year, but there’s also the hidden cost of filling out endless bug reports for them.

After last week’s failed attempt to play the demo of Neo Scavenger, I had a chat with the developer about it and found out the problem was that it was built using Adobe Flash Projector, something Adobe has abandoned. The issue was that Flash Projector does actually code-sign applications created with it (which makes OS 10.7.5+’s Gatekeeper happy), but uses an expired signature to do so. Mac OS sees this as something of a problem, and won’t launch the app unless you take the blunt approach of switching Gatekeeper off entirely (Adobe, meanwhile, address this problem by telling developers to “convert everything to Adobe AIR”). There is a workaround, however, which is for the developer to code-sign the application themselves. Frankly, if you’re making games for the Mac platform in 2014, this is something you should be doing anyway. For all the developers reading this, here’s a simple how-to guide on code-signing your games for Mac OS.

On the subject of developers, it was Game Developers Conference (GDC) this week. The biggest news to come out of GDC was that some of the “big boy” licensed game engines (namely, Unreal Engine and CryEngine) have changed their licensing policies, making them more accessible to independent developers. What this means for Mac gamers is that we’ll hopefully start to see more Unreal Engine-based games on our platform. CryEngine sadly doesn’t support Mac OS as a platform, but as Al Valentyn put it:

@ctrlcmdesc @AspyrMedia @feralgames Everything that is moving towards OpenGL positively helps. Cryengine, UE4, Source 2, and more.

2014 could be another big year for Mac gamers.